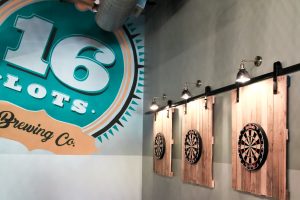 Mason, OH—16 Lots Brewing Company announces the grand opening of Mason’s first craft brewery this weekend. A ribbon cutting ceremony with the Mason/Deerfield Chamber of Commerce will be held Friday, September 15, 2017 at 1:00PM and the brewery will be open to the public after the ceremony until midnight.  Located at 753 Reading Road, the 6,600-sq. ft. brewery has a 10-barrel brewing system that will be producing 16 Lots flagship and seasonal beers.

16 Lots Brewing Company was founded by partners Mike Burton, a 21-year marketing and general management executive in the consumer products space, and Jeff Cosgrove, a 20-year home brewer whose primary career was in the engineering space in the paper industry.  The unlikely pair came together to define the vision for the space as well as their “true to style” brewing philosophy.

“We could not be prouder to show our community what we have created this coming Friday,” says Burton.  “Jeff’s beers turned out great, as did the space.  We look forward to welcoming all of our friends and neighbors this coming weekend, and hope to see them frequently.” 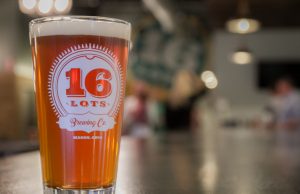 For the grand opening, all 6 flagship beers will be on tap.  They are:

The name 16 Lots Brewing Company is derived from the founding history of the city of Mason.  On June 1, 1803, Revolutionary War Veteran Major William Mason paid $1,700 at auction to purchase 640 acres of land between the Great and Little Miami Rivers in what is now downtown Mason.  In 1815, he platted 16 lots on this land and named the village “Palmira”.  The name of the town was changed to Mason in 1835.

Furlong Building and WorK Architecture + Design designed and built the space that includes an industrial farmhouse motif, with a 22-foot shuffleboard table and three dart boards.  With 140 seats inside and an additional 72 outside, 16 Lots has plenty of space to accommodate all the craft brewing enthusiasts in the community.

“We are thrilled to have successfully built another great brewery facility in the region and to be Mason’s first, is a proud honor,” said Furlong CEO Jude Hehman.

16 Lots will feature Mad Monks Pizza Co., serving thin-crust, New York-style pizzas and salads. For opening weekend, 16 Lots will be open Saturday the 16th from noon until midnight, and on Sunday the 17th from noon until 7:00PM.  Regular hours vary by weekday. For more information, visit https://www.facebook.com/pg/16lots/about/.