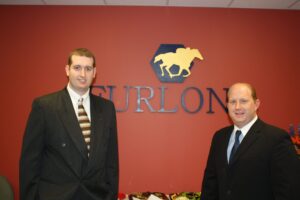 Enquirer – by Justin B. Duke -In the midst of the recession-caused crisis in the construction industry, two men decided to start their own business.

Pete Nicoloau, left, and Jude Hehman founded Furlong Building Enterprises in the midst of the recession. After a year of growth, they moved Furlong to Florence. Justin B. Duke/Staff

After a year of rapid growth, they were able to cut the ribbon on their new office space in Florence.

Hehman, of Fort Mitchell, and Nicoloau, of Hebron, were both employees of Paul Hemmer Co. As the recession hit the construction industry, Hehman was responsible for laying off employees, including Nicoloau.

The two decided they would start their own business and used the relationships they’d built over the years as a way to get customers. They decided to name themselves Furlong because they wanted to use a unit of measurement and something that would “bleed Kentucky,” where they wanted their business to be, Hehman said.

The two expected business to grow a little bit, but never as fast as it did. In a year’s time, they’d already had $3 million in sales and expanded from two employees to six.